If waterfalls in the Crimea and the Carpathians are common, then to see them in the steppe, Kherson region, for many tourists is a miracle. Surprisingly, even some locals are unaware of the existence of such sites, but there is really something to look at. To do this, you only need to go to the village of Kozatske, on the banks of the Dnieper. It is there that you can see some of the most mysterious, interesting natural objects of the Tavriiskyi region. Experts in various fields confirm that such "steppe" analogues no longer exist in the world.

These are springs flowing from the steep right bank of the Dnieper, which form picturesque waterfalls. They appeared in the 70s of the last century. We’ll note that the place is not really typical for the Kherson Oblast. It is distinguished by its secrets, legends and beauty. It is worth noting that numerous waterfalls appeared due to the waters of the Kakhovka Reservoir, which managed to make their "way" underground in soft limestone. The uniqueness of the object lies in its location - it is located far beyond the mountain systems. Nearby is the town of Nova Kakhovka, which is a popular tourist attraction, as well as the ruins of the castle of Prince Trubetskoy.

It is interesting that under the aegis of the arrangement and clearing of waterfalls, attracting additional public attention to the identified problem, a full-fledged project called "Unique waterfalls in the steppes of Kherson Oblast" was organized. Its main task was the environmental education of children, the organization of excursions for students of higher education and schools. Experts are convinced that such an approach has a positive effect on the caring attitude of people to nature and their desire to conserve resources. Probably that is why every year the tourist flow to the village of Kozatske only increases.

In total, there are at least 1,200 sources of various capacities in the territory of the Lower Dnieper National Nature Park, which are released with perfectly clean drinking water. Waterfalls are considered the most unusual natural phenomenon. All of them are single-stage and in their beauty are not much inferior to mountain counterparts. Some of them reach a height of 10 meters. Their difference is the high water throughout the year, regardless of melting snow, showers and other natural phenomena. In winter, the waterfalls become incredibly beautiful, especially if they are exposed to the sun.

After viewing the waterfalls, you can walk around the old castle from the Dnipro. From the observation decks there are magnificent landscapes that can make a real pleasure for every tourist. In the summer heat, the healing jets of the waterfall will help to refresh, relieve fatigue, get a charge of strength and energy. In addition, here you have a great opportunity to take luxurious souvenir photos, and then organize a small picnic in specially designated areas. It should be noted that behind the Kakhovka HPP dam there are a number of interesting tourist sites, including a winery, the medieval Vytautas Tower, Oleshky Sands, Pink Lakes, Askania-Nova Reserve.

You can have a good time and refresh yourself in one of the restaurants in Nova Kakhovka, which is not more than 5 kilometers, or 15-20 minutes by public transport. Of the most interesting places we will note the Premier restaurant, where there is always quality service and a pleasant atmosphere. Guests are served first, second courses (fish and meat) and desserts. Portions are medium. Loft Cafe is also a very good choice.

Literally within walking distance of the waterfalls, there is a number of good hotels in Nova Kakhovka. In particular, it is worth noting Maxim Marine Yacht Club Hotel with its own fitness center, jacuzzi, outdoor pool, parking, restaurant, great views of the rooms. Do not miss the unique opportunity to visit the winery of Prince P.M. Trubetskoy, where you can not only go on excursions, but also to stay in a comfortable room. More favorable conditions, but no less quality service is offered at the Hotel Muscat.

Steppe waterfalls are located near the ruins of Trubetskoy Castle, on rocky slopes and cliffs, the village of Kozatske. You can hear the sound of water falling down a few hundred meters. The easiest way to get to the object is from Kherson, where there is a railway station, bus station, airport. Then you need to drive by suburban transport. By train and bus, from Kyiv it can be reached in 10-12 hours. If you follow from the capital of Ukraine by car – you will have to spend 8-10 hours on the road, which will take almost 600 kilometers. For easier orientation and route planning, you can use GPS coordinates 46 ° 47′02.6 ″ N. 33 ° 21′06.0 ″ E. 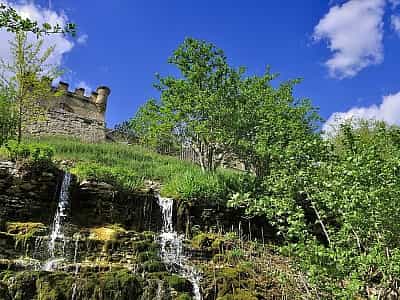 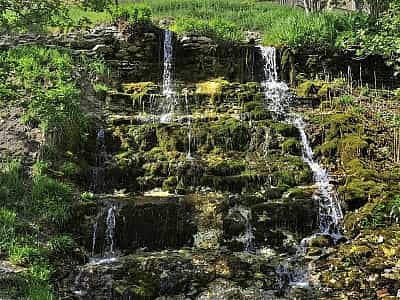 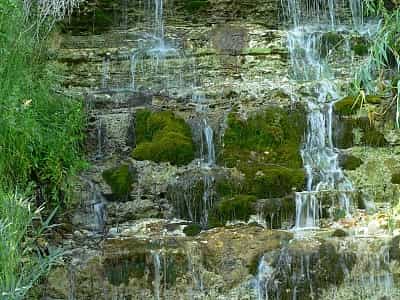